In a sport where we’ve now taken our rear cassettes  to eleven, racing on a bike with one gear can seem an anachronism. Yet given any crisp autumn Sunday, you’ll find more and more racers grinding up the hills, and spinning manically on the flats without a derailleur in site. You may even find a few racers intentionally disabling otherwise well tuned bikes, locking them in one gear. It’s not sabotage; it’s just a Phase One Conversion, and the first step into the circle.

This neo-traditionalism doesn’t make any sense.  Racing with just one gear is totally illogical, and admitting otherwise after lusting after the latest, lightest, most robotic drivetrain creates all sorts of cognitive dissonance. I’m sure that’s one reason why the single-speeder enjoys a bit of a fringe status within cyclocross, which is on the fringe of cycling, which is on the fringe of reality.

So why single speed cyclocross?

I upgraded from a 4 to a 3, because waking up at 4am to race on dewey grass before an audience composed entirely of JD and Diane sucks. It turns out there’s now an easier way – just race single speed. This is usually an open category, (always double check though) so men and women of any category can enter.

So how? Trying out single speed racing can cost as little or as much as you want.

Most every single speed race in New England welcomes a multi-speed bike temporarily disabled via zip tie or some mechanical trickery. The approach is a bit different based on your drivetrain.

The easiest of all:

After the race, just cut the ties. Then THROW THEM AWAY OR TAKE THEM HOME.

Still simple, but you need a screwdriver and a vague idea of how your rear derailleur actually works:

If this doesn’t make sense to you, just show up to the race and find someone with waxed mustache or maybe a single speed tattoo. They’d love to help.

After the race, cut the ties and back out the low limit screw until you can shift into you big cog.

If your geared bike is DI2, you can afford to drop a few hundred more for a dedicated single speed.

Once you’re ready to invest a bit, any old bike can be converted to a true single speed – one cog and one chainring. You’ll then begin to see the benefits of mechanical simplicity, as dropped chains, missed shifts, and skipping gears become a thing of the past. Yes this will mean either giving up gears forever, or getting a second bike. A second bike is never a bad idea in cross, your single speed can always double as your pit bike in a geared race. This single speed can be an affordable option if you have an older frame and a few components to get started. The recipe is simple. Your shopping list will be:

These will be machines purpose built, with adjustable dropouts and no derailleur hanger. Do you need this? No. But there are some really cool bikes out there, with most of the major manufacturers bringing at least one model to the table. You can actually roll out on a brand new, disc brake single speed for under $1,000, which is unheard of with gears. 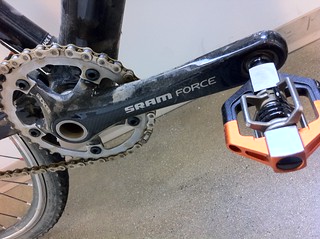 Your choice of gearing will vary based on your ideal cadence, and even the course you’re racing on. General guidance for a conversion is to start with a 2:1 ratio, and then subtract one or two cogs. So this would give you something like a 44/20 or a 42/19. The joy of zip tying is that you can pre-ride and make a decision at the last minute.

If you’re a spin to win type, you’ll go to a larger cog in the back. If you can mash comfortably at 30 rpm, another click down will give you an advantage when it comes down to the sprint.

In New England we’re blessed with the Zanconato Single Speed Series, which will let you dip a toe in the single speed life style, and greet you with a warm, zip tied embrace. Yes, this is New England; there are points, a series standing, and you’ll be sorted accordingly on Cross Results, but the spirit animal of the series is very much the mullet. More from Chip.

You can find races that are a part of the series marked with a Z on our 2015 race schedule.

Team Monster Truck will have zip ties on hand!

2 thoughts on “Fit to be Zip Tied: a SSCX Primer”